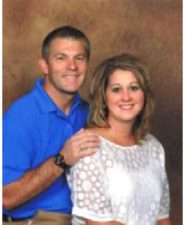 Steven A. Butz (45) was born February 16, 1967 in Greensburg to John A. and Nancy J. (Cook) Butz. Steve was a lifelong resident of Greensburg, and graduated from Greensburg Community High School in 1986. Upon graduation, Steve went to work for James Rivers (Printpack), then was employed at Hoeing Supply. The last 5 years of his life, he was employed by Honda as a packaging engineer.

Denise L. Kramer Butz was born June 7, 1970 in Greensburg, the 7th out of 11 children, to Raymond C. and Helen J. (Diekhoff) Kramer. Denise, too, was a lifelong resident of Greensburg, and graduated from Greensburg Community High School in 1988. After high school, Denise went straight into the workforce for KB Foods, where she was employed for 20 years. After completing her bachelor’s degree, she began working as the Human Resource Manager at Kroger Bakery, Indianapolis, which is where she was employed at the time of her death. Steve and Denise were married on April 25th, 1992 and together they built a life with each other. They bought a house less than two miles from the farm Denise grew up on, which is where they raised their two wonderful sons: Blake (17) and Brandon (15). Both Steve and Denise had a deep sense of love for their family, giving all they had to make sure their family was cared for. They were hard-working, service-oriented people, always willing to lend a helping hand wherever it was needed. They were both actively involved members of St. Mary’s Catholic Church, serving on numerous committees, including the St. Mary’s Festival Committee and Christ Renews His Parish. Steve was also a member of the Knights of Columbus and helped coach in the youth wrestling program, as well as the Greensburg Junior High Wrestling team. Denise was involved with Big Brothers/Big Sisters, the AIM Buddy Lunch Program, and served on the search committee for the CEO of DCMH.

Steve and Denise both recognized that all they had came from God and were always willing to generously share their blessings with others. That generous spirit, coupled with their fun-loving personalities, led them to have many different circles of friends, but fond memories of them all. Steve and Denise loved the people God put in their lives and enjoyed the relationships they had with all of them. Of all the success they achieved throughout life, their proudest accomplishments were their two sons. They were devoted parents, spending much of their time supporting their sons in the endeavors they chose to take part in. Both boys were heavily involved in the IXCR Circuit (Indiana Cross Country Racing). As racing four-wheelers became a passion for them, it also became something they could all do as a family. Steve was a huge support to the boys, helping them with their four-wheeler endeavors, but also counseling them as to the attitude they must have while on and off the course. And Denise’s role was that of being their biggest fan, always there on the sidelines cheering them on at times when they were doing well, and cheering them up at times when things didn’t go as planned. Racing became the tool in which both Steve and Denise could teach their sons about life. And the lesson they most wanted them to learn is that life is so much like a race: There are going to be things that happened that we don’t want to happen or like to happen but you still have to finish the race as best as you can. The boys are now learning how true this is, as life has taken a turn for them that they didn’t like or want to happen. On Sunday, December 2, 2012, while returning home to Greensburg from a weekend trip with friends, a tragic plane crash took the lives of Steve, Denise, and two of their closest friends, Don and Barb Horan. Now, the boys continue “the race”s as best they can, relying on the love their parents gave them, and the faith in God Steve and Denise instilled in them from the time they were little. Steve and Denise will forever be remembered as devoted parents, loving members of their families, and friends to their church community and the business worlds in which they were a part. There is no doubt the void left by the passing of Steve, Denise, Don and Barb has left a deep hole in our community, and our church family.

But instead of focusing on the overwhelming void, we would rather celebrate and remember the faith and love they shared with their family, friends, Church and community.

Denise and Barb were avid walkers and were known to organize groups of ladies for brisk early morning walks. Steve and Don were also physically active and ran on a regular basis. With this in mind, the idea of starting “On Eagle’s Wings” 5K Run/Walk and Kids Fun Run, was born. This event will honor their devotion to leading both physically and spiritually fit lives. I have no doubt that as we take to the streets of Greensburg, the town they all were life-long residents of, they will be walking right there with us, through the streets of gold. And I have no doubt they will have a lot of angels joining in! We invite all of you to join us in not only honoring their lives and all they stood for, but in also remembering loved ones you have lost. Join us in the 5K. 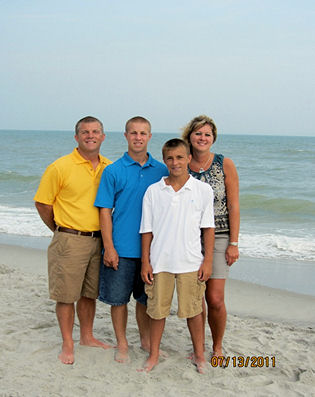 On Eagle’s Wing 5K is in memory of Steve and Denise Butz and Don and Bark Horan.